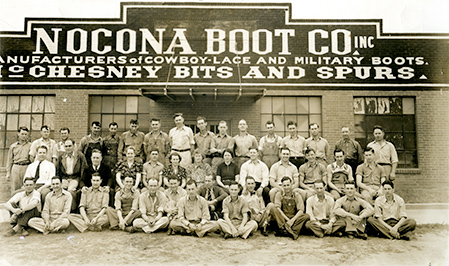 From the Annals of Manly Footwear – In 1879, Herman Justin made his first pair of cowboy boots at his shop in Spanish Fort. Justin moved to Gainesville in 1877 and found a job at the Norton Shoe Shop. He worked there for two years learning the craft of shoemaking.  With a $35 loan from the town barber, he opened his own bootshop at Spanish Fort.  At first, Justin produced an average of two pairs of boots a week.  The quality of his boots soon earned him a loyal customer base.   In 1889, he moved the business to Nocona to take advantage of the Missouri, Kansas and Texas Railroad.