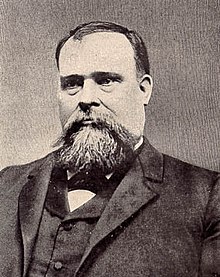 From the Annals of the Governors –    In 1891, James Hogg was inaugurated as the 20th Governor of Texas.  Hogg who was born near Rusk in 1851 was the first native-born Texan to serve as Governor.  Hogg, a newspaperman and attorney, served as County Attorney of Wood County, District Attorney for the 7th District and Texas Attorney General before serving three terms as Governor.  Hogg was remarkably progressive for his day.  His main targets were the railroads, foreign land companies.