Every season Red kicks-off with the Annual Deadman of the Year Award – which goes to player who contributed about as much to his team’s success last season as would a dead man. The award can only go to a player who at times has shown signs of actual life in being a true contributor on the field. And injuries rarely factor into the DMOTY Panel’s decision making.

There were several worthy candidates. Jacksonville Jaguars QB Blake Bortles endured an awful start to the season losing 9 of his 12 starts while boasting a QB rating of 79.8 and ultimately making way for Cody “Who’s He” Kessler. New Jersey Jets WR Terrelle Pryor was similarly unimpressive totaling 14 catches in the six games he played before being escorted to the door only to be picked up by the Bills and released again after two games. Pittsburgh Stealers K Chris Boswell cost his team at least 2 games with errant kicking and made only 65% of his attempts – making only 5 of his 10 attempts from 40-49 yards (he missed 5 PATs to boot). Red discounts the candidacy of Washington OTNAs QB Mark Sanchez because he might have been technically dead since 2016. 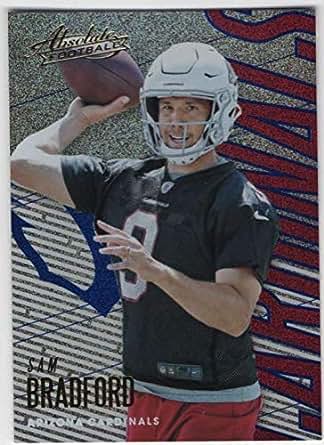 But the undisputed winner of the 2018 Dead Man of the Year Award goes to Arizona Cardinals QB Sam Bradford (make that former Arizona Cardinals QB Sam Bradford). After signing a one-year $20 million contract in March, Bradford was expected to start for a full season while highly regarded rookie Josh Rosen learned the ropes. SB lasted all of three games before being dumped in a ditch in the desert. In his three starts Bradford went 50 for 80 (not awful), for 400 yards (quite pathetic), 2 TDs (aaarg!), 4 INTs (that don’t work) and 2 lost fumbles (oops). Amazingly, no other NFL team picked up SB (instead of Colin Kaepernik). And although the oft-injured Sad Sack Sam has never really had what one could call a “good NFL season”, he has not been horrid since 2011 when playing for the hapless St. Louis Rams. Still his remarkable 2018 season of ineptitude will not go unnoticed here at PinH. Congratulations Sam, you are last season’s Dead Man of the Year.

PS:  Red likes how the only trading card image he could find of Bradford shows him in training camp attire.