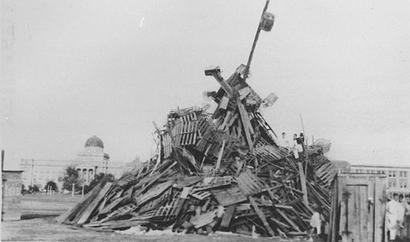 From the Annals of Texas A&M –  In 1999, 11 Texas A&M students were killed, one former student was killed and another 28 injured during construction of the annual bonfire for the UT (or TU as the Aggies would have it) game.  The bonfire had been a tradition at A&M for almost 90 years.  Early Bonfires were just that – piles of trash. But over the years, the Bonfire grew exponentially, setting the world record in 1969.  By the time of the 1999 Bonfire collapse, the Bonfire ritual had become a months long endeavor producing what ultimately proved to be a precarious 90 foot tall six tiered structure centered around two telephone poles affixed end to end.   The ensuing investigation revealed that there were no exact plans for the Bonfire, the structure had never been approved by an engineer, and that drinking and hazing were prevalent.  None of that took away from the tragedy of the event and the dedication of those who died in the construction accident.   The tragedy led A&M to declare a hiatus on an official Bonfire. However, since 2002, a student-sponsored coalition has constructed an annual unsanctioned, off-campus “Student Bonfire” in the spirit of its predecessor.