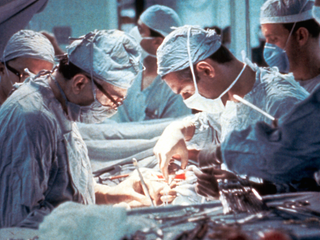 From the Annals of Overeating –  In 1964, Dr. Michael DeBakey and his team performed the world’s first successful coronary artery bypass graft surgery in Houston.  Debakey developed the concept behind the coronary bypass after noting that in many forms of arterial disease, the portions above and below a diseased or blocked segment of artery were normal.  He theorized that the damaged portion could be bypassed to restore blood flow and prevent a fatal heart attack.  In the first successful coronary bypass he used a  large vein from the patient’s leg to bypass the blocked or damaged area between the aorta and coronary arteries.  The surgery has now become common-place performed at hospitals around the world.

So enjoy your Thanksgiving meal.