Well, Ol’ Red was a sad 2-4 last week having picked the Texans and the  Patriots to win and the Cowboys to lose.  Red is used to disappointment from the Texans – but the Pats are another story.  Red may soon be eating his preseason words about the apparently mighty Jags.

Your Game of the Week Game – Buccaneers over Stealers.  Ryan Fitzpatrick is living proof of Bill O’ the Clown’s (and that’s Texans’ Head Coach Bill O’Brien as if you couldn’t guess) gross inability to manage even a moderately competent professional quarterback.  Fitz has proved himself to be more than moderately competent while subbing in for the suspended Jameis Winston and JW may have trouble reclaiming the huddle if Fitz continues his winning ways.  Not to mention the sartorial splendor he sported at the post-game presser after the Bucs tore up the Eagles for an impressive win.  Fitz wore . . . Fitz displayed . . . – oh hell, Red has to show the photo 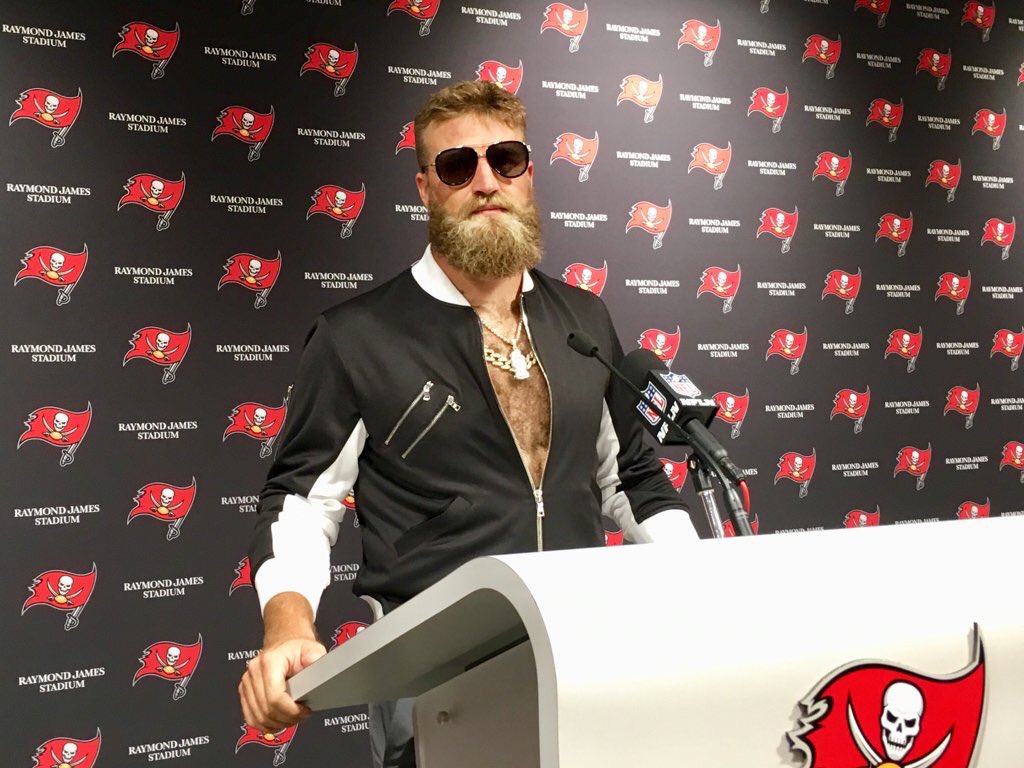 If this doesn’t convince you that the Bucs are a team to reckoned with – nothing will.  And the Stealers are no slouch either.  Right now these are the top two offenses overall and top two passing offenses in the league – which is somewhat amazing given the way the Chiefs have been tearing it up.   So Red thinks this could be the highest scoring game of the entire season (topping the 88 put up by the Bucs and Saints in Week 1).  Have the coffee table fully prepped on Monday night (chips, queso, guacamole, brownies (laced or otherwise) and a full cooler loaded with beverages of preference on the floor.  You don’t want to miss a minute of this one.  Tampa Bay 51 Pittsburgh 48.

Your Texas Game of the Week  – Seahawks over Cowboys.  Red has to credit the Cowboys pass rush last week who made Eli Manning look either like an old man with a walker or a clueless rookie.  They probably try the same act against R. Wilson who still can actually move.  It is somewhat effective but not effective enough to overcome the Cowboys offensive ineptitude on the road.   Red will send Pete the Cheat a reminder that the Red Rule is in place this week.  Seattle 14 Arlington 10.

Your National TV Game of the Week – Browns over Jets.  Surely someone will be watching this game on Thursday night when the Browns finally get their act together and win a game for the first time since the days of Lou “The Toe” Groza  – okay really since the days of Bernie Kozar.  The only problem here is that the Jets look to be this season’s “Inconsistent Team of the Year.”  Meaning that you will never know from week-to-week which Jets team is going to show up – the one featured potential Rookie of the Year Sam Darnold and rolled and smoked the Lions or the one that crapped their Under Armour against the Dolphins.  This week Red thinks the Jets should pull out the brown pants.  They can borrow them from the Browns.  Cleveland 24 New Jersey 16.

Your Disappointing Game of the Week – Falcons over Saints.  You might expect offensive fireworks and a highly entertaining game when these NFC South rivals meet.  Not this week.  Red predicts a tight defensive struggle and both Brees and Matty Ice falter and both defensive lines excel.  Atlanta 17 New Orleans 14.

Your Time Zone Hex Game of the Week  – Dolphins over Raiders.  Right now the Raiders don’t need a hex working against them to lose big to halfway decent teams.  The Gruden offense is terrible and the Khalil Mack trade was a complete blunder.  How often has the best defensive player in the entire freaking NFL been traded away!  So we will see how Genius Jon handles a triple forward time zone hex in the swamps of South Florida.  Red guesses – not so well.  Meanwhile, the Dolphins are playing like an actual professional football team and sit alone atop the AFC East – much to Red’s shock and dismay.  The secure that spot this week with a brutal beatdown of the hapless Raiders.  Miami 39 Oakland 16.

This  Week’s Shit Bowl – Texans over Giants.  Texans finally come back to the not-so-friendly confines of NRG Stadium on the South Loop. Just look for the rusting heap of the Astrodome – a fitting paradigm for what appears to be the rusting heap of another wasted Texans’ season.  Ah, but you say hopefully,  “The Giants are coming to town!”  That may be a one-week fix for all that ails the average team, but remember these are your perennially disappointing Texans – coached by Bill O’ the Clown who shows no hope of ever becoming even a halfway decent game day coach.  Every Texans game is marred by some blundering decision regarding either challenging a call on the field, clock management, inept play calling or as featured Sunday a complete breakdown on special teams.  Last week it was a mistake that even Junior High teams don’t make when the Texans left a gunner on the Titans punt team uncovered who scooped in a lob from the upback and scampered 67 yards untouched to the end zone.  John Madden was rolling over on his couch.  Maybe just maybe, the Texans can beat a sad sack team like the Giants.  Or maybe Saquon Barkley breaks the all time NFL record for total yards from scrimmage.  All things are possible when the Texans play.  Red will not be attending this beastly bowel battle and if you are watching please remember to remove all sharp objects from your man or woman cave lest ye be tempted to open up a vein in dismay sometime during the third quarter.  Houston 13 New Jersey 9.