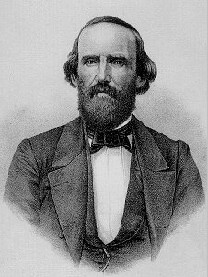 From the Annals of the Code Duello –  In 1839, Reuben Ross and Ben McColluch fought a duel in a field north of Gonzales.  The dispute was actually between McColluch and Alonzo B. Sweitzer and arose during their 1839 race for a seat in the Texas House of Representatives and came to a head during their subsequent involvement in the pursuit of Indians who had raided Gonzales County.  Following a lengthy exchange of insults, Sweitzer’s friend Ross delivered a formal challenge to McCulloch, who refused to accept on the grounds that Sweitzer was not a gentleman. Ross, however, was an acceptable substitute.  Ross, an trained and  experienced duelist, seriously wounded Ben McCulloch in the rifle duel. A shot to his right arm left McCulloch permanently crippled.  Ross sent his personal surgeon to attend to McCulloch and expressed regret at having to have engaged “so brave a man in a private encounter.”  McCulloch was indicted for accepting the challenge but was not prosecuted.  Ross himself was later killed by McCulloch’s brother Henry in an alcohol fueled confrontation.  And Sweitzer died in a duel in 1841.  The encounter was one of many foolish examples of code duello tradition that persisted in Texas despite the antidueling law passed by the Congress of the republic in 1836.