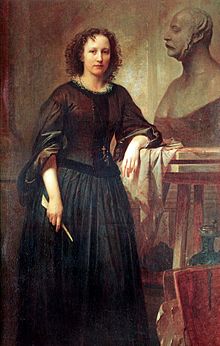 From the Annals of the Artists –  In 1911, the Elisabet Ney Museum was founded in Austin. It served as one of the earliest centers for artistic development in Texas.  The German-born Ney spent the first half of her life in Europe before emigrating to the U.S. at the age of 39 with her husband Edmund Montgomery.  The first settled in Georgia before coming to Texas where Montgomery purchased Liendo Plantation near Hempstead.  Ney ran the plantation while Montgomery tended to his studies.  In the early 1880’s, Ney was invited to Austin by Gov. Oran Roberts.  She purchase land in Hyde Park and built a new studio named Formosa.  She revitalized her artistic career in Austin creating her most famous works – statutes of Stephen F. Austin and Sam Houston for the Chicago World’s fair and the memorial to Albert Sydney Johnson in the Texas State Cemetery.  The museum which bears her named is located on the site of her studio in Hyde Park.