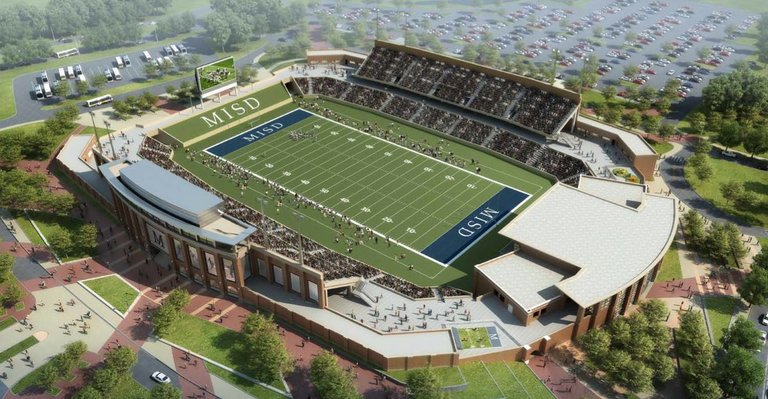 The recent decision of the McKinney Independent School District to spend millions on a high school football stadium has drawn nation-wide attention.  After months of controversy and debate, more than two-thirds of McKinney voters approved spending $63 million as part of a $220 million bond package on a show-piece high school football stadium.  Yes, that’s $63 million.  By way of imperfect and time-challenged contrast, the Astrodome cost only $35 million to build in 1965 – that would be around $375 million today.

But the 12,000 seat McKinney stadium will hardly be alone in the on-going arms race to build bigger and swankier high school football stadiums in wealthy Texas suburbs.  Allen recently completed a $60 million stadium that seats 18,000 and is located about 3 miles from where McKinney will build its sports temple.  Another 12,000 seat edifice is under construction in Katy with a projected cost of more than $62 million.  The first $100 million high-school stadium cannot be far down the road.

For comparison, the $63 million  (financed by school bonds)  would be about 30% of the annual operating budget of McKinney ISD which was about $206 million for the 2015-16 school year.  Supporters claim that the stadium will be a source of local pride and bring tournaments and other business to the area.  Opponents look upon it as a case of completely misplaced priorities.   Red appreciates that, like it or not, football is king in Texas, but does it have to sit on a $63 million throne?    For the record, McKinney High School was 3-7 overall and 1-6 in district in 2015.  McKinney Boyd was 6-5, but did not make the playoffs, and McKinney North was 6-4 and also missed the playoffs. Even $63 million can’t buy you a winning football team.