From the Annals of the Trail Drivers –  In 1868, Jesse Chisholm died from food poisoning in Oklahoma.   Chisholm was not a cattleman.  He was a frontier trader.  But he did blaze the famous trail that bears his name.  He was born in Tennessee to a Anglo father and Cherokee mother.  He was an early pioneers into the Arkansas Territory. In his 20s, he joined a community of Cherokee Indians in northwestern Arkansas and took up trading.   trader. His familiarity with both Anglo and Native American culture and language (he could reportedly speak 14 different Indian dialects) helped him build a thriving trade with the Osage, Wichita, Kiowa, and Commanche.

Chisholm’s trading expeditions gave him a superior knowledge of southwestern geography. He led several important expeditions into the Southwest during the 1830s and 1840s, and during the Civil War opened a trading post near Wichita, Kansas.  After the war, he blazed a first trading routefrom Wichita to the Red River in North Texas and then extended the route to the Gulf of Mexico.  The route became known as the Chisholm Trail.

The trail was a straight wagon road with easy river crossings and relatively easy grades.   The trail was designed for the lumbering heavy freight wagons used for commerce.  By 1867, the first cattle drivers began using the trail to move beef on the hoof to the railroads in Kansas. During the next five years, millions of cattle trampled down the trail.  The large numbers of cattle cut a swath 200 to 400 yards wide.  The heavy use and erosion cut the trail down below the level of the plains it crossed. Traces of the trail may still be seen to this day. 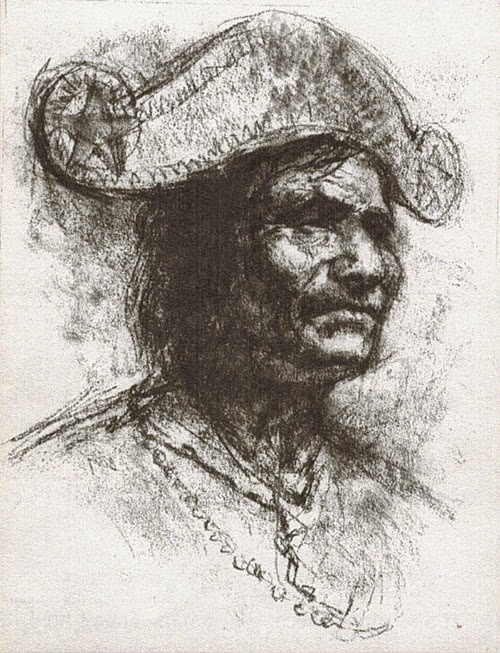 From the Annals of the Indian Wars –   In 1839, the main battle of the Cherokee War was fought a few miles west of Tyler.  The Battle of the Neches was the culmination of a genocidal campaign that began when President Mirabeau B. Lamar announced that the time had come for an “exterminating war” on Texas Indians. Lamar and his administration refused to recognize earlier treaties with the Cherokees in East Texas.  To foment war, Lamar accused Cherokees and their the Kickapoos, Delawares and Shawnee of planning to join Mexico in an insurrection.  Texan troops under the command of General Thomas Rusk were sent to remove the Indians from their recognized lands. Under pressure, Chief Duwali (aka Chief Bowl or Bowles) led an evacuation of their main town.  But that did not satisfy the Texans who attacked the Indians at dusk on July 15. The first day’s battle proved indecisive, but on July 16, Texas troops led by Rusk and Edward Burleson routed the Cherokees and their allies near the headwaters of the Neches River in Van Zandt County. Chief Duwali was on horseback but was dismounted and wounded.  He continued the fight on foot but was hit again. As he sat wounded on the battlefield a Texan soldier executed him with a shot to the head. Reports were that 100 Indians were killed in the attack.  Texans claimed only 5 dead and 28 wounded.  The survivors fled to the Indian Territory. This was the end of any major Indian presence in East Texas.