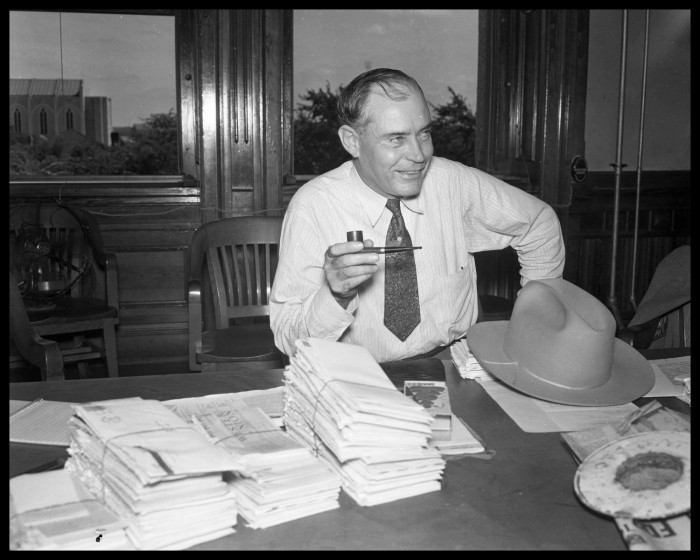 From the Annals of the Governor’s Office – In 1941 Lt. Gov. Coke Stevenson became Governor when W. Lee “Pappy” O’Daniel was installed as U.S. Senator following a special election.  Known as “Mr. Texas”, Stevenson was a no-nonsense conservative whose remarkable life story appealed to most Texans.  He had basically educated himself rising from mule team freight hauler, to bank custodian, to bank cashier, to lawyer.  Stevenson’s political career began with election as county attorney of Kimble County.  He later served as County Judge. Before being elected as Lt. Gov. he served several terms in the House and was selected as Speaker of the House.  Stevenson’s approach was so low-key that his critics accused him of doing nothing. He served two more full terms as governor stepping down in 1947 at which time he was the longest serving governor in Texas history.  Unfortunately, Stevenson is perhaps best known for his loss in the 1948 Senate race to Lyndon B. Johnson.  Stevenson is portrayed heroically in Robert Caro’s Means of Ascent.  Critics have complained that Caro’s portrait of Stevenson was influenced by his growing disgust with LBJ as his research progressed.  Nonetheless, Stevenson’s rise from poor country boy to Governor is a remarkable story in itself.