From the Annals of the Revolution – In 1836, Texas declared its independence from Mexico.  Following a meeting on March 1 at Washington-on-the-Brazos of delegates from the seventeen Mexican municipalities of Texas and the settlement of Pecan Point, George C. Childress and a committee of five were tasked with preparing a resolution calling for independence.  In the early morning hours of March 2, the convention voted unanimously to accept the resolution prepared by the committee.  Fifty-eight members of the delegation signed the document announcing to the world that Texas had declared itself to be the independent Republic of Texas.   Less than two months later after the Battle of San Jacinto, actual independence was secured.  The Republic would last only about 10 years until Texas was annexed by the United States. 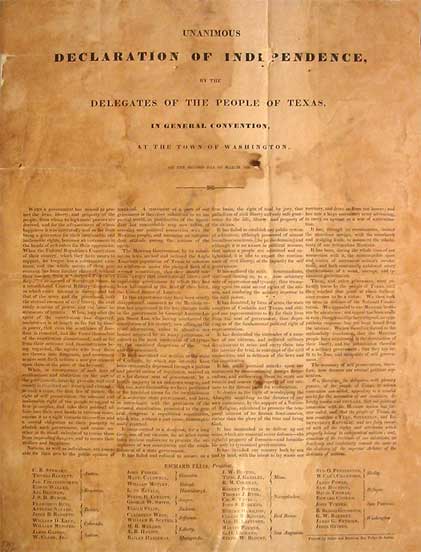 From the Annals of the Revolution – In 1836, Texas declared its independence from Mexico.  The previous day, delegates from the seventeen Mexican municipalities of Texas and the settlement of Pecan Point met at Washington-on-the-Brazos to consider independence from Mexico. George C. Childress presented a resolution calling for independence.  Richard Ellis, the president of the convention appointed Childress to head a committee of five  Edward Conrad, James Gaines, Bailey Hardeman, and Collin McKinney to draft a Declaration of Independence from Mexico.  Childress probably already had a draft version of the document with him when he arrived. As the delegates worked, they received regular reports on the ongoing siege on the Alamo by the forces of Santa Anna’s troops.  Childress and the committee drew heavily on the United States Declaration of Independence.   In the early morning hours of March 2, the convention voted unanimously to accept the resolution.

Red’s favorite passage:  “It has, through its emissaries, incited the merciless savage, with the tomahawk and scalping knife, to massacre the inhabitants of our defenseless frontiers.”