The Louisville Courier-Journal reports that University of Louisville graduate transfer quarterback Kyle Bolin might be considering the University of Texas as a possible landing spot.  Bolin started 5 games in 2015 before giving way to 2016 Heisman Trophy winner Lamar Jackson in the final game of the regular season.  After Jackson threw for 4 touchdowns against Texas A&M in the Music City Bowl, Bolin became a pine-rider for the 2016 season.  As a graduate transfer, Bolin would be immediately eligible to play for the Horns.  After a lackluster season featuring respectable play from highly touted freshman QB Shane Buechele (21 TDs, 11 INTs, 2958 yards and 60.4% completion rate), new head coach Tom Herman could be looking for something more.  Would he find it in Bolin?  He was a second-stringer – albeit to the Heisman Trophy winner, but he was still not a starter in his senior year.   Look for Bolin to more likely land at Northern Illinois where he probably walks into the starter’s job.

Until bowling season begins, this will be the last of Red’s TCFGOTW.  But this one may be a doozy.  The UT Longhorns travel up I-35 to the unfriendly confines of McClain Stadium on the banks of the Brazos to face the Baylor Bears in the last Big 12 game of the year.  Texas is a huge 21 point road dog coming off of what was their second best performance of the year in a losing effort to Texas Tech.  Of course, the best performance was the butt-whipping they laid on the eventual national champion OU Sooners.  Yep, Red is calling that one right now before the final 4 field is even set. Amazing to think that OU’s only loss of the year might be to the lowly Horns.

Baylor is coming off its own disappointing loss to TCU on Thanksgiving weekend which shattered what dreams it had left of making the final four playoff.  Red is tired of the Bears already.

Baylor has nothing to play for except a possible New Year’s Bowl bid, but even that is looking unlikely and a trip to San Antonio seems almost inevitable now.  UT has absolutely nothing left to play for but pride and possibly salvaging head coach Charlie Strong’s job.  Red thinks the players really like Strong and are not about to let the first African-American head coach in UT history go down the tubes without a fight.  Red’s key to the game is freshman running back Chris Warren.  His incredible 276 yard, 4 touchdown performance in the loss to Tech on Thanksgiving had longtime Longhorn fans reminiscing about past greats such as Jim Bertelsen, Earl Campbell and Ricky Williams – none of whom ever had a breakout performance like Warren.  Red thinks Warren is the real deal and a mere 150 yard, 2 touchdown performance may be enough to beat the despondent Bears.

For an in depth analysis for the ultimate sports geek, please turn to SB Nation which runs through a myriad of statistics and graphical analyses to come up with a precise answer as to why the Longhorns have underperformed over the last 5 years.  And the answer is – They suck!

To illustrate the Longhorns’ suckiness, SB Nation presents exciting and allegedly meaningful visual aids such as – 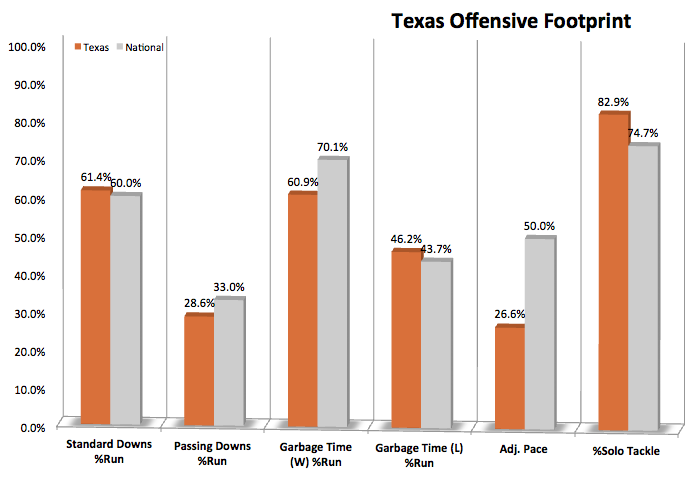 And if that doesn’t get you excited about the upcoming season, try –

And if you haven’t fallen asleep – Hook ’em.