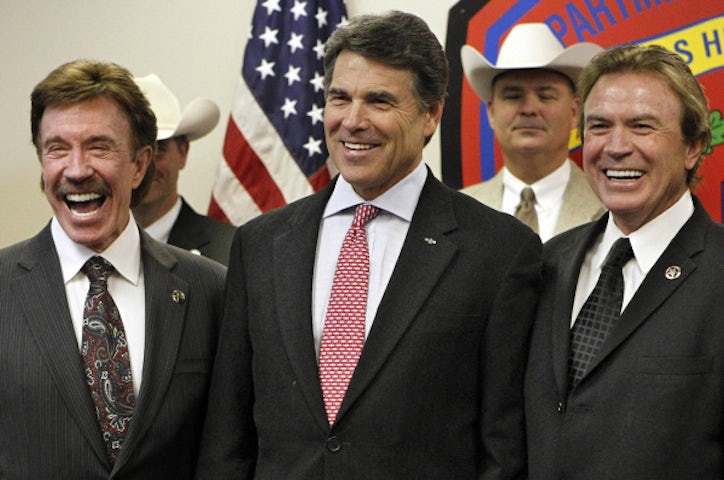 Concerned Texans and Americans (Tea Party Wingnuts) are in no way calling into question our brave and courageous men and women in uniform (except to claim that they are coming to round us up and take our guns away). They are merely following orders (of the Muslim Kenyan Terrorist Sympathizer). What’s under question are those who are pulling the strings at the top of Jade Helm 15 back in Washington (that Muslim Kenyan Terrorist Sympathizer again). The U.S. government says, “It’s just a training exercise.” But I’m not sure the term “just” has any reference to reality when the government uses it. (Even Red “just” can’t figure out what the Texas Moron is “just” trying to say here).

“Well, I’m not trusting what we’re being told,” said Mike Hightower, an affable antique store owner and real-estate agent (and possible part-time conspiracy theorist) in the very small town of Smithville, Texas, (does it still bill itself as the “Heart of the Megapolis?”) where some Jade Helm 15 (Red preferred the noir classic Jade Helm 2) exercises will take place. He added, “I think there’s something a little more involved than what they’re telling us.” (okay, confirmed conspiracy theorist).

If Washington (you know who) wants to cool the embers of controversy (that we made up out of whole cloth), then it should quit stoking the fire (doing its job protecting our country), as with the posting of a map of Jade Helm 15 “just” exercises that label some areas of the country, including Texas, as “hostile,” according to KHOU 11 News in Houston and verified by the Washington Post (OMG are you really that f%#king stupid?).

I have an idea (now let’s be careful here): If the government insists on running expanded military ops (they’re really coming to take our women and children and most importantly guns) across seven Southwest states, why doesn’t it move all that “military training” south and protect our borders (keep them pesky brown skins out) at the same time?! (Red has never seen a question mark and an exclamation point used simultaneously, so this must really be important – or not!?. So there.)

Whatever Jade Helm 15 actually is (women, children, guns, etc again), I think it is more than coincidental that the FBI director just confessed in February that the presence of ISIS can be felt in all 50 states of the U.S. and that the Pentagon (Remember, I support our support our brave men and women in the military unless they happen to be in command) is suddenly running its biggest military training exercise (oops! I slipped up here and actually correctly identified Jade Helm 15 as a military training exercise – please forgive me) with every branch of the military across seven Southwestern states (rather than, for example, Kenya). Whether deterrence, display of power or something more covert or devious (okay, I’m back on track – women, children, guns, etc.), let’s not come with any patronizing nonsense of impotence and simplicity (okay, he lost Red again) when its origin is in Washington (you know, perhaps we could overlook that Muslim Kenyan Terror Sympathizer thing – if he weren’t also a gall-danged Democrat!).

I’m glad Texas Sen. Ted Cruz is asking the tough questions of the Pentagon about Jade Helm 15, (Like – why are you coming to round us up and take away our women, children and guns?) particularly because its “exercises” (it must be a lie if I put it in quotes) come too near to my ranch’s backdoor as well (Ah, now we’re getting somewhere), at least according to the map. It’s pretty sad and bad (and plaid and mad and rad) when major military ops (getting army jargon talk on us) are ordered in a large, fiery (really, we’re actually on fire most of the time in the  Lone Star state) state like Texas and not even the governor or its senators know the specifics (other than the complete briefing they got from the Military who of course cannot be trusted).

It’s like shooting fish in a barrel. Really big fish in a tiny barrel. You can thank Red later.