From the Annals of Banditry –  In 1880, the “Bandit Queen” married her second or possibly third husband.  The Queen was Myra Maybelle (Belle) Shirley Reed Starr and she marred outlaw Sam Starr in the Cherokee Nation.  Starr was from Missouri and her family had been involved with notorious Confederate irregulars including William Quantrill.  By the end of the Civil War, the family fled Missouri and moved to Scyene near Dallas. Their home became a hideout for bandits including the Younger and James brothers – veterans of Quantrill’s cutthroats.  Continuing a family legacy of criminal behavior, Belle’s first husband, Jim Reed rode with the Younger, James, and Starr gangs on their murderous rampage throughout Texas, Arkansas, and the Indian Territory. Reed was killed in Paris  by a deputy sheriff.  After that,  Belle may have married Bruce Younger.  In any event, she did later marry another outlaw in Sam Starr.   Belle and  were later convicted of horse theft and Belle received two six-month prison terms.   Unable to stay out of trouble, Sam Starr was later killed in a fight with an Indian policeman.  Belle Starr subsequently took several lovers, including Jim July (or Jim Starr), Blue Duck, Jack Spaniard, and Jim French.  In 1889, while Starr was living in the Choctaw Nation, Starr met her end when she was ambushed and killed. 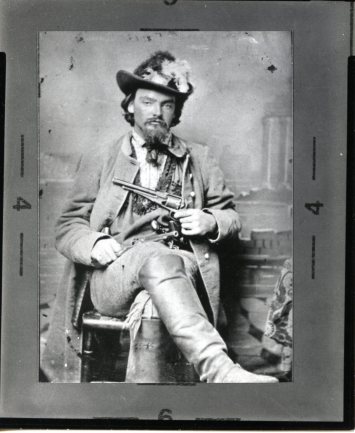 From the Annals of the Irregulars –  In 1864, William C. Quantrill was captured by Confederate forces after reporting to Bonham.  Quantrill was already notorious at the time for his raid on Lawrence, Kansas in which men and boys were indiscriminately killed and other atrocities, but Lt. Gen. Edmund Kirby-Smith found Quantrill to be useful to the Confederacy’s goal of instilling fear and terror in the western theatre of the war.  Kirby-Smith order Gen. Henry McCulloch to use Quantrill to help round up the increasingly larger numbers of deserters and draft-dodgers in North Texas. Quantrill’s raiders mostly killed those they found and were pulled from this duty.  Quantrill’s next mission – to track down a band of Comanche raiders – was equally unsuccessful.   Quantrill moved south of the Red River during the winter of 1864, at which time Quantrill’s lieutenant, William (Bloody Bill) Anderson, formed perhaps an even more vicious band.  The two competing renegade groups began raiding Grayson and Fannin Counties and the level of violence became such that regular Confederate forces had to be assigned to protect residents from the activities of the irregular Confederate forces.

General McCulloch finally decided to run Quantrill out of North Texas.  On March 28, 1864, when Quantrill appeared at Bonham as requested, McCulloch had him arrested on the charge of ordering the murder of a Confederate major. Quantrill escaped later that day and returned to his camp near Sherman, pursued by over 300 state and Confederate troops.

Quantrill’s raids in Texas were essentially over and he was supplanted when his gang of bandits elected George Todd, a former lieutenant to Quantrill, as their new leader.  Quantrill and an increasing small band continued raiding.  In Kentucky they were surprised by Union irregulars. Quantrill was shot through the spine, captured and died in a Union prison in Louisville, Kentucky shortly after the end of the war.