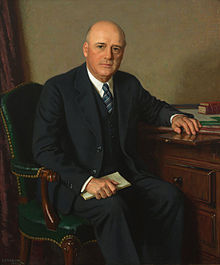 From the Annals of the Halls of Congress –  In 1913, Sam Rayburn of Windom took the oath of office as a member of the United States House of Representatives.  Mr. Sam, as he was known, was to serve in Congress from the presidency of Woodrow Wilson until that of John F. Kennedy.  Rayburn  rose to majority leader in 1937 and was elected Speaker of the House in 1940.  He remained Speaker until his death in 1961.  Rayburn was a master politician who helped negotiate the Roosevelt-Garner ticket in 1932 backing his friend John Nance Garner for Vice-President.  He worked tirelessly to pass New Deal legislation and as chairman of the Interstate and Foreign Commerce Committee in the 1930s he oversaw legislation that established the Securities and Exchange Commission and the Federal Communications Commission.   He worked closely with Senate majority leader Lyndon B. Johnson in the 1950s and Texas benefitted greatly from have the two pillars of power working in D.C.  Rayburn was married only briefly and said that his greatest regret was not have a tow-haired son to take fishing.  The Sam Rayburn Reservoir and several schools in East Texas are name after Mr. Sam.  He was the longest serving Speaker in U.S. history.

From the Annals of Flood Control – In 1965, the Army Corps of Engineers began the deliberate impoundment at Sam Rayburn Reservoir.   Construction on the reservoir had begun in 1956 at which time the project was known as “McGee Bend Dam and Reservoir”, because of its’ location immediately upstream from McGee Bend on the river.  In September, 1963, the 88th Congress adopted a special resolution changing the name to “Sam Rayburn Dam and Reservoir”, in honor of the recently deceased Speaker of the U.S. House of Representatives Sam Rayburn, a long-time champion of soil and water conservation.

“Hands off the threads, Creep!”

Frank Sinatra.  Said to Speaker of the House Sam Rayburn (D-Texas) at the 1956 Democratic National Convention.  Rayburn approached Sinatra after his performance before the delegates and apparently was a bit too friendly for Frank.  So Frank called the second most powerful man in the U.S. at the time a “creep.”