The Texas Democratic Party is coming off of a successful (for it anyway) fund raising effort during its annual convention held in early June.   The TDP raised nearly $2 million during its week-long virtual convention, breaking the party’s digital daily and monthly fundraising record during the event.  The majority of the funds came from almost 39,000 individual donors with about $600,000 coming from corporate sponsorships.   The record haul pales in comparison to Texas GOP efforts, but with polls showing that Biden is within striking distance of the Reality TV Show Joke of a President expect the TDP to redouble its efforts between now and November.

If you are of a mind to make a difference Red suggests that you send some money to the Democratic candidates running for the Texas House in districts that could be flipped.  If the Democrats gain just 9 seats they will control the House and be able to keep the Texas Senate from continuing its incredibly successful and anti-democratic partisan gerrymandering of both State House and Senate districts and Congressional districts.

The GOP’s gerrymandering is so severe that even with 51% of the total congressional vote, it is estimated that Democrats would win only 13 of Texas’ 36 congressional seats. This still gives Tom Delay a hard-on.  The Texas GOP has two main strategies – try to make as hard as legally possible to vote and gerrymander the Democrats into permanent minority status.  This has to stop.

You can find the targeted districts here.   Even a small donation to the Democratic candidate in a state house race will be appreciated. 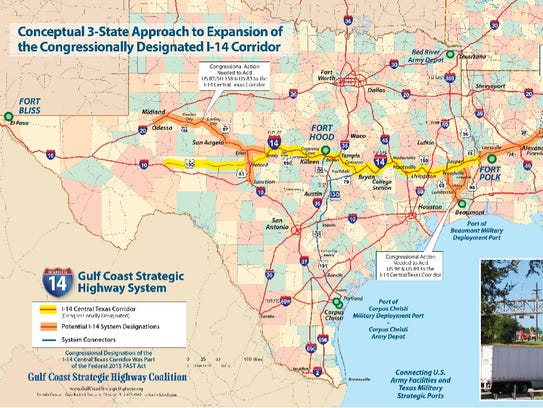 San Angelo really wants an Interstate Highway running through its front yard (with apologies to John Mellencamp). Rep. Mike Conaway (R-Texas) has introduced legislation to the House of Representatives that supports expanding Interstate 14 through Midland and San Angelo. The expanded route would begin at I-20 outside of Midland and run through San Angelo to meet the planned route of I-14 at Brady, with another spur connecting to I-10  near Junction.

The most likely method for getting approval would come if the planned expansion could be attached to a major infrastructure bill such as that languishing in Congress with scant attention from the Trump administration. Although it would be nice to have a clearer shot at heading to parts west, Red isn’t holding his breath while waiting for this one.

Politico reports that Texas Republican Congressman Mike McCaul (more or less of Austin – although with his heavily gerrymandered district it’s hard to pinpoint an epicenter) has reported approximately 7,300 stock transactions in an array of industries over a two-year period.   McCaul is reportedly the first or second wealthiest member of Congress with an estimated net worth of almost $300,000,000.  Yet, that aint enough apparently.  McCaul and his family are voracious stock traders bent on acquiring even more money and creating a potential ethical quagmire as McCaul surely must be voting on matters that affect his personal wealth.  Red foolishly thinks that a Congressman should actually pay attention to the business of the nation more than his own pocketbook.

Now don’t get Red wrong here. Red admires McCaul as someone who got rich the old-fashioned way.  He married well.  Most of McCaul’s wealth is held by his wife, Linda McCaul, the daughter of Clear Channel Communications CEO and founder Lowry Mays.  His skyrocketing overall net worth appears to be the product of generational wealth transfer.  If only Red had been so smart he too could have been busy carrying water for his corporate masters in D.C. in his spare time after he finished his day-trading.

Every  Republican Congressman from Texas – with one exception – voted for the abomination that is the Affordable Healthcare Act (aka Trumpcare) – and then celebrated with a beer afterwards.  They voted for a bill that they had not read, that didn’t have a score from the CBO and that was rammed through without any support from the Democrats and then were positively giddy.  Gee, that sounds familiar.  Who has been complaining about the similar passage of the ACA (aka Obamacare) for the last 7 years?  Oh yeah, the Republicans.  Except the ACA had a CBO score so we actually had a pretty good idea of what it what cost and what its effects would be.

The current crop of Republicans somehow managed to forget all of their past criticisms of the Democrats and the passage of the ACA after nearly a year of debate and work,  and rush to push out a bill that will punish the most vulnerable, possibly cause approximately 24 million people to lose coverage, eviscerate critical protections for average folks,  and provide a huge tax break for their fatcat donors.  And despite the claims that popular provisions of Obamacare (such as coverage for pre-existing conditions) are being protected – it’s a bald-faced lie people.  Red hasn’t read the 1800 pages of the ACHA (and is guessing that none of the Reps who voted for this have either), but reports are that under the ACHA, states will be able to opt out of coverage for pre-existing conditions.  No doubt, that will be high on Our Poor Idiot Governor’s list of things to accomplish in screwing over the average Texan (apparently his only goal in life).  So in Texas, it may soon be a pre-existing condition to have been raped, assaulted, pregnant, or have had a caesarian section, cancer or a host of other diseases, illnesses and problems.  Good luck getting affordable insurance then – all you Trump voters.

So who was the lone Texan GOP holdout?  By pure coincidence, it happens to be the only GOP congressman who had a competitive race in 2016.  That would be Will Hurd of San Antonio who beat Pete Gallego by less than 4000 votes out of about 225,000 cast.  Hurd managed to stand on his principles in not casting a vote that likely would have doomed his chances for re-election next year.  According to Hurd,

“Since the implementation of Obamacare, I’ve told my constituents that the only meaningful metric when it comes to healthcare is actual access to quality, affordable care – not just health insurance. While the goal of Obamacare was to make healthcare more accessible and more affordable, it has done just the opposite. Likewise, while the goal of the American Health Care Act was to combat the skyrocketing premiums and outrageous deductibles millions of Americans face, it too, falls short.”

It warms the cockles of Red’s heart, to hear such selfless sentiment delivered by a vulnerable Congressman who is devoted to the best interests of his constituents (which primarily include re-electing said Congressman).  Would that others had such courage.

Last week Rep. Beto O’Rourke (D- El Paso) announced his candidacy for U.S. Senate seeking to unseat “Lying” Ted Cruz (TP-Texas).  O’Rourke comes from a political family – his father was El Paso County Judge.  O’Rourke himself has been in politics for about 12 years – first serving as an El Paso City Councilman and then barely unseating 8-term Congressman Silvestre Reyes in the Democratic primary in 2012.

O’Rourke carries some baggage from his days as a rock musician and two arrests – neither of which resulted in a conviction.  Since then, he has operated a successful business – making enough money to venture into politics.  His legislative track record is light, but that would be expected from a Democratic Congressman from Texas serving in a GOP dominated House of Representatives.

O’Rourke has taken strong stands on legalization of marijuana and protecting LGBT rights, but he kicked off his “campaign” when he and Rep. Will Hurd (R-San Antonio) embarked on a 3 day road trip to D.C. when airline flights were cancelled.  The two representatives live-blogged their discussions as they drove east and created remarkable internet buzz by rationally and civilly discussing the issues.

It is worth noting, that no one from El Paso has ever been elected to state-wide office and that O’Rourke is a long shot against the Cruz publicity and money machine.  The only hope would be that Cruz’s overweening ambition and narcissism will turn off enough moderates to consider making a switch.  Still it would be remarkable if O’Rourke could crass the 45% threshold.  But when faced with a choice of “Lying” Ted or a long shot, Red is not afraid of big odds.  Red is fully on the Beto Bandwagon.

If you are interested in O’Rourke’s campaign, you can find out more at betofortexas.com.

In the wake of the incredibly bungled push to repeal and replace Obamacare, Gallup’s latest daily tracking poll has Donald Trump’s approval rating a 36% – a new low.  His disapproval rating of 57% is one point below his all-time high of 58% reached earlier this month.

Red still thinks his floor is around 29% – which means DT doesn’t have to much farther to fall to bottom out – at which point he may get the dreaded  “Dead Cat Bounce.”   Trump can take some solace in the fact that the Republican controlled Congress is even less popular.  Real Clear Politics reports that Congress’ average approval rating for March is  20.8% with 64.5% of Americans disapproving of the job Congress is doing.   What outstanding leadership the Grand Ol’ Party has produced.

From the Annals of the Constitution –  In 1860, the U.S. House of Representatives’ Committee of Thirty-Three submitted a proposed constitutional amendment protecting slavery in all areas where it already existed. The proposed amendment was intended to stop states from seceding.   Following the election of Abraham Lincoln, the secession fury picked up in the South.  The Republican Party was committed to restricting slavery in the Western territories, and Southerners were dead set on protecting their right to own other human beings.  The House of Representatives appointed the Committee of Thirty-Three, consisting of one member from each state, to investigate avenues of compromise that would keep the South from seceding.

Most of the floated plans involved an expansion of slavery into the Western territories, but that fight was what had killed off the Whigs and given rise to the Republican party, and Northern states were opposed to any further slave states entering the Union.  The only plan to make it out of the committee was submitted by Thomas Corwin of Ohio and called for an amendment to protect slavery, enforce the fugitive slave laws, and repeal state personal liberty laws.  The South was increasingly concerned faced with numbers of slaves escaping to the North and the personal liberty laws made it difficult to return persons to the condition of chattel slavery.  South Carolina, Florida, Mississippi, and Alabama had already seceded by the time Corwin made his proposal. The plan went no where and the issue of slavery was only resolved with a long and bloody civil war.

And this is why floating absurd plans to amend the Constitution to fundamentally alter our federal system are a stupid idea Governor Abbott.