From the Annals of Professional Football – In 1963, Lamar Hunt moved the Dallas Texans to Kansas City and renamed the team the Chiefs.  Hunt owned the AFL’s Dallas franchise which began playing , owner of the American Football League franchise in Dallas, TX, moved the operation to Kansas City. The new team was named the Chiefs.  It started operations in 1960, the first AFL season and the same year as the Dallas Cowboys. The team immediately faced serious competition from a new franchise in the older more established league.  The Texans had a strong home-state identity with quarterback Cotton Davidson (Baylor), fullback Jack Spikes (TCU), and running back Abner Haynes (North Texas State). Haynes, was named the league’s Player of the Year after leading the AFL with 875 yards rushing and 9 touchdowns. The Texans were an offense-centric, high scoring team, but three closes losses kept them from challenging for the division title.  They finished the 1960 season in second place in the West with an 8-6 record.  The Texans averaged 24,500 for their home games at the Cotton Bowl, the highest average in the league. Hunt is considered to be the founding father of the AFL and one of the main reasons the league was able to survive until it merged with NFL in the Super Bowl era.

Hunt’s team is not to be confused with the 1952 incarnation of the Dallas Texans.  That was an NFL team which was a transplanted version of the New York Yanks.  The team lasted only one season in Dallas and was the last NFL franchise to fold up shop when owner Giles Miller sold the ailing franchise back to the league.

Red desperately wants a Dallas Texans t-shirt with that logo. 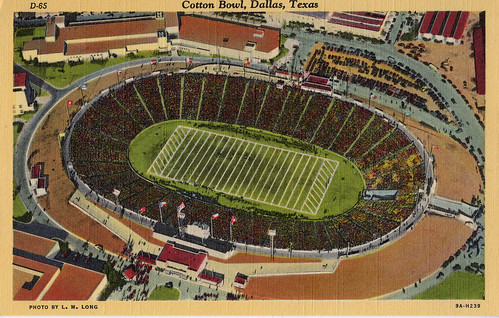