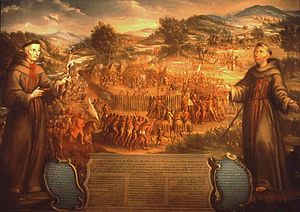 From the Annals of the Red River – in 1759, a Spanish troop led by Diego Ortiz Parrilla was defeated by a group of Native Americans at a fortified Taovaya (Wichita) village near Spanish Fort. Parrilla’s expedition was intended to punish the Norteños (in this case the Tawakonis, Tonkawas, and Wichitas) for their destruction of Santa Cruz de San Sabá Mission in1758. Parrilla’s force consisted of 400 troops from the provinces of northeastern Mexico and the Texas presidios and 176 mission Indians and Apaches.   The need for retribution was reinforced by continuing attacks.  In December 1758, a Comanche band accompanied by members of eleven other groups surprised a group of Apaches near the presidio and killed twenty-one. In March a native force reportedly made up of the same tribes responsible for the mission attack massacred nineteen men guarding the presidio’s horse herd, leaving only one survivor.

On October 7, the troop was attacked by sixty or seventy warriors who led the Spaniards into a well-laid trap.  In pursuit, the troop was led to a sandbank at the edge of the Red River, before the fortified Taovaya village.  The Spaniards attempted to withdraw to regroup but found the road cut off by mounted Indians firing muskets. The Spaniards were trapped in the sand with horses sinking up to their knees.  The resulting 4 hour battle went badly for the force.  Facing a superior force of Comanches, Yaceales, and Tawakonis, and Taovayas, the Spaniards were attacked from the fort and the field.   The troop eventually unlimbered two cannons but they did not affect the course of the engagement. The Apaches, Mission Indians and a number of Spaniards deserted. As darkness fell, Ortiz Parrilla managed an orderly withdrawal, leaving the cannons on the field but with losses of nineteen men killed, fourteen wounded, and nineteen by desertion.

From the Annals of the Border Wars –  In 1931, the “Red River Bridge War” reached a new level of confrontation when Gov. Ross Sterling ordered a detachment of Texas Rangers to prevent use of a newly constructed free bridge over the Red River.  The bridge which had been built by Texas and Oklahoma connected Denison and Durant, Oklahoma.  The problem arose when the Red River Bridge Company, which operating a toll bridge running next to the new bridge, filed suit in U.S. District Court seeking an injunction preventing the Texas Highway Commission from opening the bridge. The RRBC claimed breach of an agreement by the THC to purchase the toll bridge and damages for its unexpired contract as a condition for opening the new bridge.  The court granted a temporary injunction Sterling had barricades erected preventing access to the bridge from the Texas side.  Oklahoma Governor William (Alfalfa Bill) Murray claimed that Oklahoma’s “half” of the bridge ran lengthwise north and south across the Red River, that Oklahoma held title to both sides of the river from the Louisiana Purchase treaty of 1803, and that the state of Oklahoma was not named in the injunction. On July 16, Oklahoma highway crews crossed the bridge and took down the Texas barricades.  Sterling responded by ordering The Texas Rangers to rebuild the barricades and protect Texas Highway Department employees charged with enforcing the injunction.  In response, Murray ordered Oklahoma highway crews to tear up the northern approaches to the still-operating toll bridge closing traffic over the river.   The Texas Legislature resolved the controversy by  passing a bill granting the RRBC permission to sue the state in order to recover its damages.   This allowed the injunction to be dissolved and  the free bridge was opened to traffic, but not before some additional grandstanding by Murray who had declared martial law on both sides of the bridge.  The controversy ended with no shots fired and no injuries.